El Museo del Barrio is delighted to present the 44th Annual Three Kings Day (Virtual) Celebration on Wednesday, January 6, 2021, titled Fuerza Colectiva: Celebrating our Roots and Diversity. The upcoming celebration honors and embraces our community’s collective strength in response to the pandemic and injustice, and the cultural contributions of the African diaspora. The Museum’s first-ever virtual celebration, hosted and directed by TV personality and Producer, Rhina Valentin, will include musical performances, festive skits, cameos by our famous giant puppets, and saludos from this year’s honorees.

It is a small event as NYC events go. In the past it had  mostly parents  participating with three children. It is but one of many activities that make NYC neighborhoods great.

Photo are from past years. 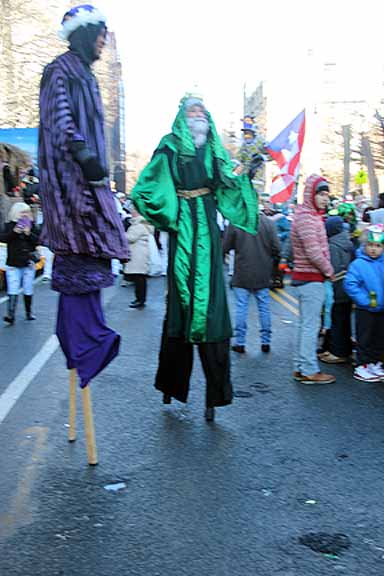 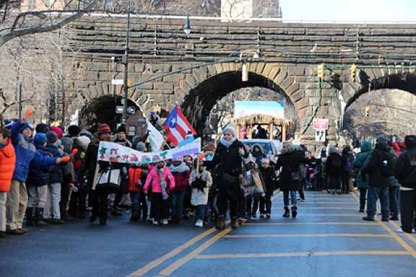 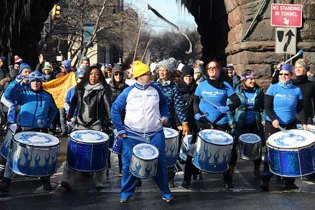 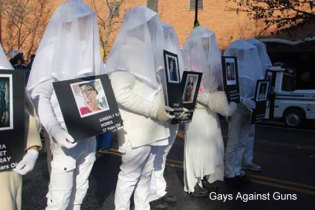 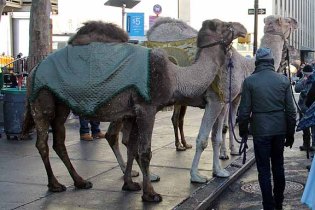 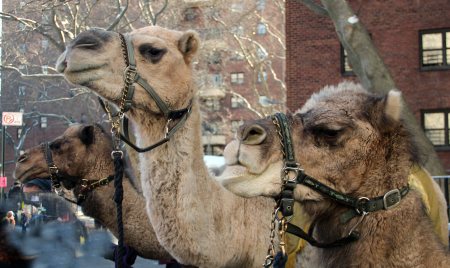 and  the cleanup crew…

During this unique time and being careful of keeping distances and not going stir crazy, I suggest the following:

Find a few places to walk where there are not a lot of people in groups. Getting outside into the Crisp winter air emphasizes the beauty of luminous clouds, maybe eerie fog and mist, and (if an early bird) capture that special light only a sunrise can provide.  If not sure this is your thing then, you should start out taking short jaunts from your vehicle or apartment; no big hikes.

The city affords you to notice the changing colors and shadows along tree lined streets. City parks can provide you the beauty of a rural nature.

The main concern is to wear comfortable layered clothing. Do not bundle up too much! Believe me, the main concern is staying dry – little sweating – and being able to add or remove layers as needed to adjust to the temperature.

When I walk in the city, I wear a light knapsack. [When in a park or the woods, where there is snow, I do the same but sometimes drag a plastic sled behind me – good to store extra layers or maybe camera stuff or a snack. (don’t overdo the weight).]

My camera equipment, for the most part, will function as normal as I keep the battery warm as possible. I have a spare battery in my inside pocket. My Iphone stays in my pocket until needed.[Cold weather takes its toll on batteries]

With the right clothing, planning, and dependable equipment, nature provides us with some magnificent material! Give it a try if you haven’t yet.

I convinced myself to go for a walk in the neighborhood. Some of these photos will show you the vibrant colors that can be captured during of a winter walk. {You don’t need a camera to enjoy the walk!] 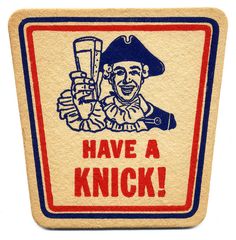 Walking  down east 92nd street from 3rd Avenue to York Avenue,  I came upon a sign for a beer that I had not heard of in years – Knickerbocker. It reminded me that this area of Yorkville once had several breweries, one of which was familiar to me – Ruppert’s  Knickerbocker Brewery. Later, when I researched the 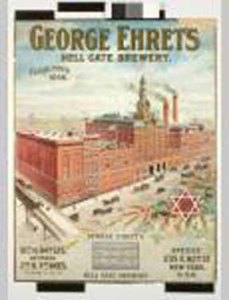 area I found another  brewery, one  I had had never heard of called the Hell Gate Brewery. It was once the largest brewery in the United States and named for a section of the nearby East River.

When the breweries were operating, this area was known for its “streets that smelled like beer”. Today, the area+ is now comprised of a few apartment buildings, parking garages, a small park, a pet store, a Chase bank, and a grocery store.

I probably could do a complete story on the History of Yorkville but I will only focus upon the owner of the Ruppert Brewery – Colonel Jacob Ruppert.

Colonel “Jake” Ruppert while having a popular beer company also was known as the owner of a major league baseball team The New York Yankees.

So, let’s go back to walking down East 92nd Street.  To my surprise, I found, in a parking garage, a series of large color photos of the Ruppert brewery and the Yankees.

Also, Colonel Ruppert himself in the twilight of his glory days, pictured with Babe Ruth. 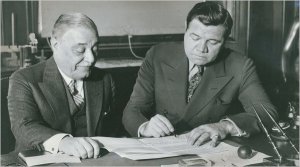 Here are some of the pictures hanging with the garage/ 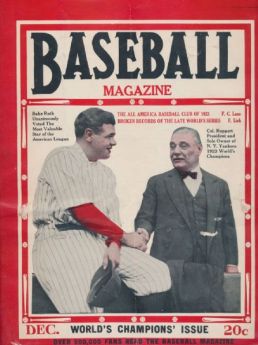 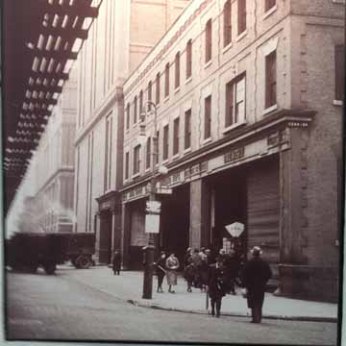 Was this the “Home Run Boy? 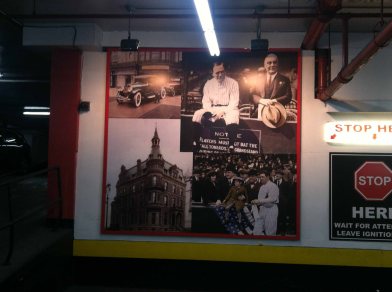 It’s enough to give me hope that the story of the old New York beer and baseball is not totally dead but kept in small out of way places throughout our country.

The 92nd street area was also a significant but scattered Irish population that included James Cagney who grew up on East 96th Street.

Colonel Jacob Ruppert lived in New York City and had homes in Garrison (Eagles Nest) and Rhinebeck (Linwood) New York. He was a frequent customer at Foster’s Tavern in Rhinebeck NY. 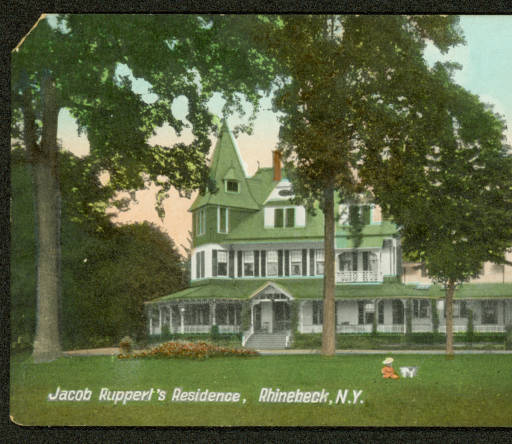 This week,  I went to the Leonard Cohen exhibit at the Jewish Museum. (East 92nd and 5th Ave). The museum is housed in an old mansion and along with this exhibit, has other exhibitions that explore art and culture from ancient to modern times.

I enjoyed my visit and have written a few observations but first you must read an excellent review  written by Jordan Hoffman in the AMnewyork newspaper.

“Don’t come to the Leonard Cohen exhibit expecting a typical collection of memorabilia. There are no dog-eared notebooks under glass, no stage fedoras on display. For those of us sick of that sort of thing, let’s quote the man and say ‘Hallelujah”

The exhibit is very unusual as most of the exhibit is located in very dark  rooms. This use of black walls allows you to focus on the wall  projections, images and videos . Each space  has seating (a little hard to find in the dark)  but the darkness creates  a feeling of intimacy and gives Cohen’s music, as well as the visual images, more impact.

Before going I thought that this would be a typical visit where you can leisurely walk through the exhibits. However, this is an exhibit that, to really enjoy,  you must be willing to take quite a bit of time to sit in the different areas. Whether a fan of Cohen or not, sitting and watching the stories unfold before you lights up the mind and enhances your enjoyment.

Is it worth a visit?  I would say that the museum as a whole is worth visiting. I feel that the Cohen exhibit might be better enjoyed by people who are familiar with Cohen’s music and career. (Exhibit open until September 8th,)

postscript: The music was great!

This past week was Asia Week in NYC. Many galleries presented a wide variety of Asian Art. Most are in private collections and are rarely displayed in public.  Many of the venues are free and it is a good way to see a wide variety of media. Note: the auction houses change often so calling ahead is always best.

The following are from Sotheby’s which displayed a diverse array of Chinese, Indian, Himalayan and Southeast Asian works of art and paintings dating from the Neolithic period to the present day. The brochure indicated that over 1300 lots will be offered for sale.

Note: This was only one of many places in the city that were displaying Asian Art.

Today I walked up Madison Avenue from east 70th Street to East 86th Street.( We city folk do a lot of walking!) I was impressed with some of the store windows and the quality of what they were selling.C ertainly, fashion is alive and well in this area of Manhattan. Here are my photos of the current styles being offered this early spring. This post is a little longer than usual. 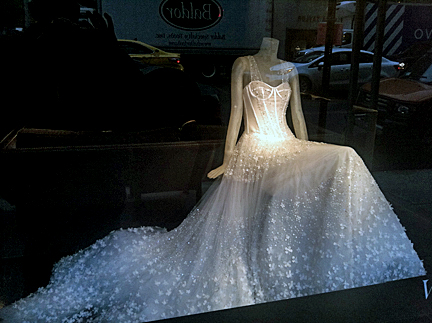 These photos show 3-dimensional  replicas of people. They use a 360 degree photo scanner of you. Amazing new technology.

This is a “pop-up” store called Doob. 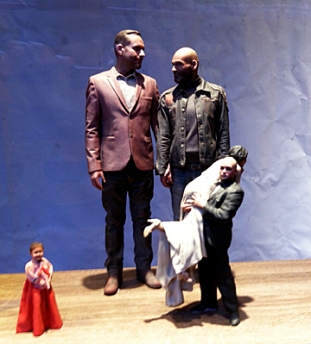 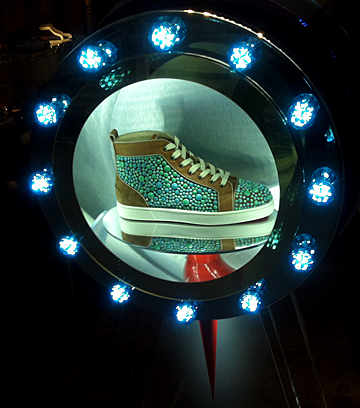 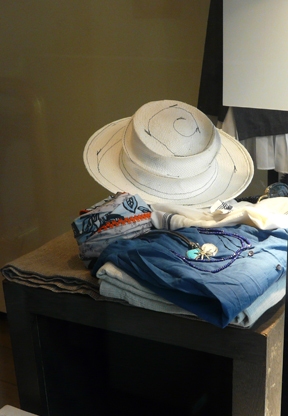 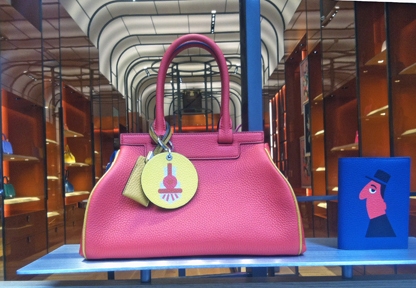 Added these for fun. 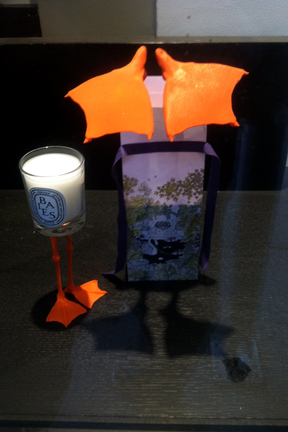 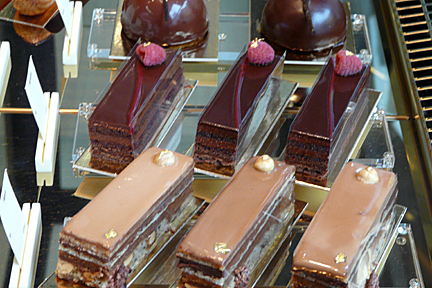 The fashions  through a slight glare of the store windows.

Short walk today around the east 60’s. I was off to an appointment and thought I would grab some shots of items displayed in some store windows.

The practice of depicting characters of animals in miniaturized porcelain and  cloth seems to be very popular.

And, speaking of animals…

My original Blog – Houses made of wood – in Manhattan? – might be of interest .

Look at the similarity of  the following three homes’

These are the only ones found that have been restored and contain a front porch. These homes are really unique to the city. I discovered that around 1866 the fire code banned  these types of houses from being built below 86th Street.

Unfortunately before many houses can be land marked, developers change them into something else. Quite a handful of old wood frame houses still exist in various parts of Harlem but none are official landmarks and so might not last much longer in the coming years.There is a lot of bland-new construction arriving in all NYC  neighborhoods these days but the actual charm that still remains in some neighborhoods comes from the past so hopefully more investors will see that in the future.

Note: The landmark commission usually takes several years to approve a property. Also, the dwelling must be able to be renovated so many of the wooden home have fallen to decay and vandalism.

Really not Sunday but visited on a Friday. 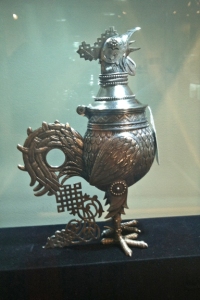 I often stop at Sotheby’s just to look at what is on exhibition. It is one of the many free things to do in NYC.

Similar auction houses are Christie’s, Doyles and Bonham’s as well as several others scattered around the city. Often there are several floors that can be visited.

Today, I focused on the following:

Sotheby’s is pleased to offer a superb selection of Russian works, including decorative pieces of furniture and important  bronzes from distinguished private collections.

Furniture – not sure they are Russian but all had tags. 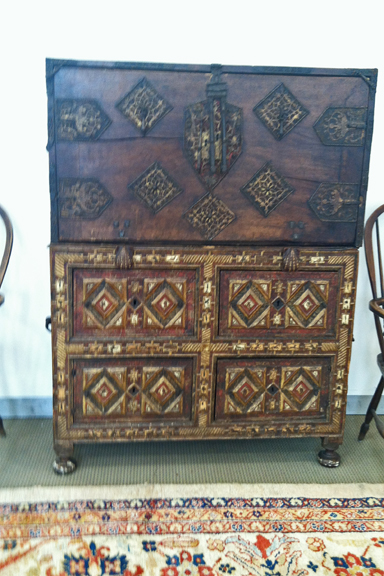 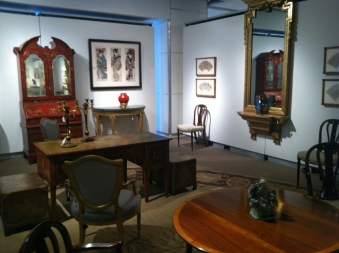 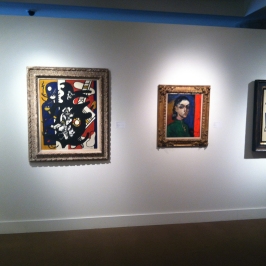 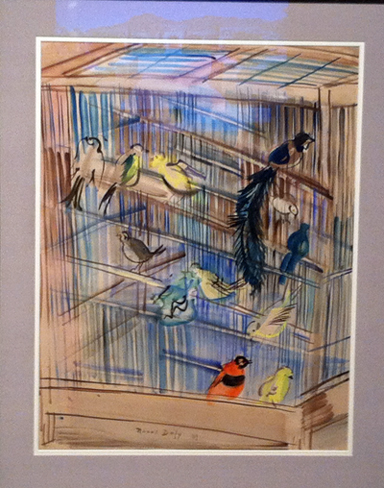 The small photographs are mine  but click the Titles for a better view  from Sotheby’s.

AN ELDERLY PEASANT COUPLE IN A HORSE-DRAWN SLEDGE 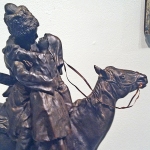 Please note: The exhibits are time and date sensitive based on the dates of the auction.

At this writing, it is very  cold outside and we have snow on the ground. Many winter scenes of NYC show mostly midtown or the larger parks… here is a glimpse of a small park on the upper east side of Manhattan. 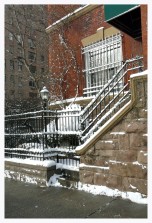 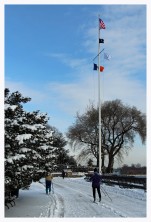 It was nice to have the lights on as it added to the enjoyment of a winter day in the park, 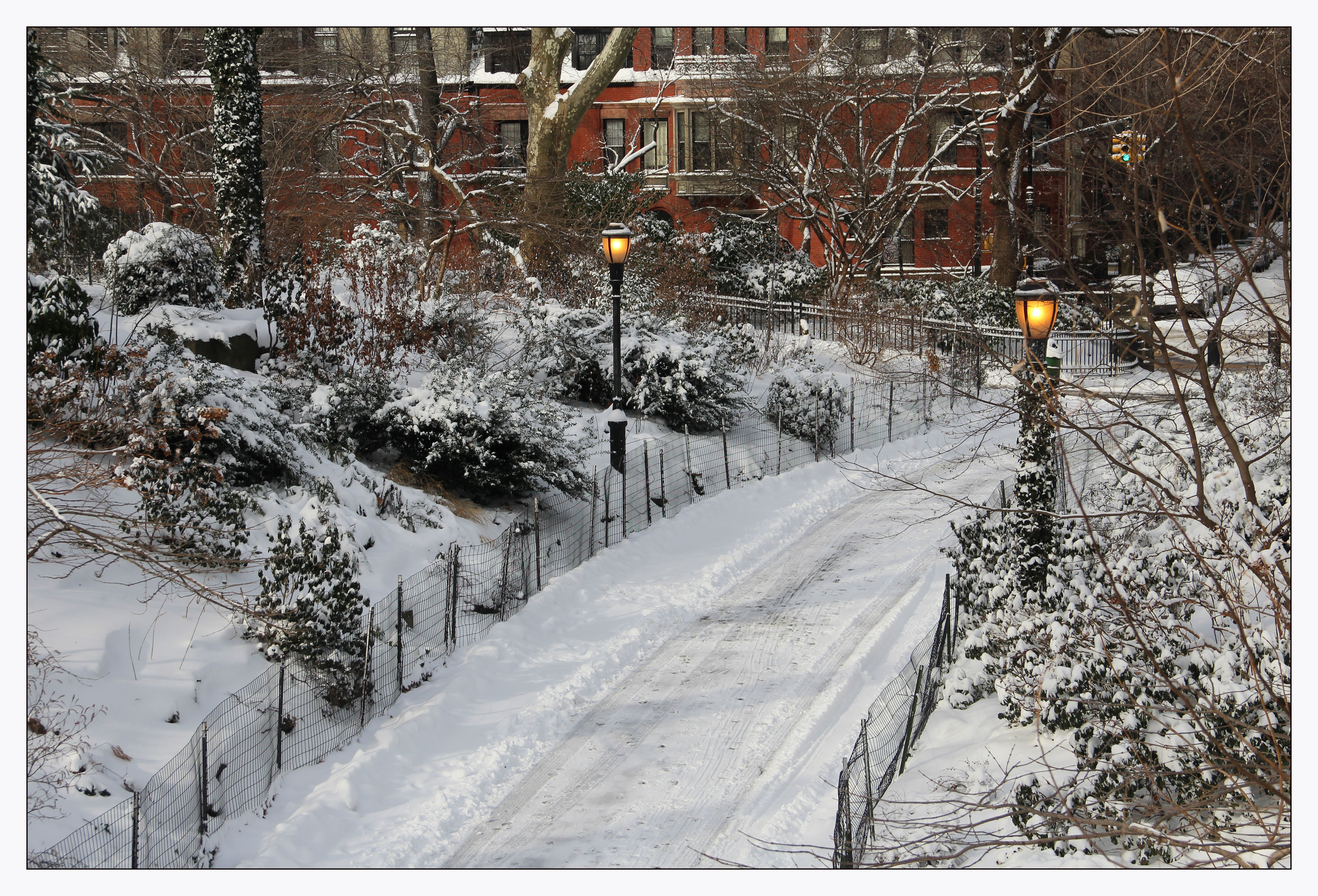 Lastly, you know it is cold when you see the vapors rising from the chimneys. 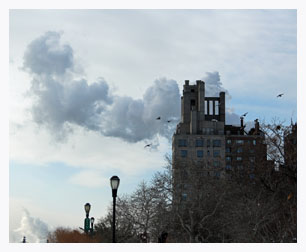