Urban Mountains: New York City is a very visual place to visit… plenty to see and do.  Here are a few photos from places higher than ground-level – imagine yourself here in NYC during the evening.

NEW YORK CITY   It has been called the “City that never sleeps!”

A visit to Rockefeller Center––a city within a city––is a must. New York’s most important urban complex of the twentieth century, the Center was built between 1931 and 1939. Rockefeller Center extends from 48th to 51st Street, and from Fifth to Sixth Avenue.

The Fifth Avenue frontage is a show case for the cause of international understanding–hence the International Building, the Maison Française, the British Empire Building, the Palazzo d’Italia––and the Channel Gardens (named for the English Channel separating France and England), between the French and British buildings, lined with fall foliage and statuary

Rockefeller Center epitomizes the Machine Age––building materials like aluminum and stainless steel, parking facilities for cars and trucks, high speed elevators, air cooling, noise silencers and escalators. There is so much to see both inside and outside but I thought it would be nice to feature a few of the works that are on the outside of the buildings.

I placed the street location or reference point on each photo.

What is Art Deco?

Although the question seems simple, historians have not been able to agree upon a single, definitive answer. The time period, aesthetic principles, motifs, and just about everything else that typically defines a style or movement, are all open to interpretation when it comes to defining Art Deco.

I thought I would include something you might miss when going to or walking past Radio City Music Hall.

Two of the six playful plaques under the marquee at the front entrance.

A couple of observations as of this publication date.

I came across this article about a unique opportunity to see an expensive dollhouse. I reprint here for you to enjoy.

The World’s Most Expensive Dollhouse Will Be On Show at Columbus Circle This Month – During Thanksgiving Season.

If you think Manhattan condos are pricey, feast your eyes on the world’s most expensive dollhouse! Valued at $8.5 million, The Astolat Dollhouse Castle is a 29-room micro-mansion that’s been is filled to the brim with 10,000 painstakingly crafted miniatures that include “elaborate furniture, oil paintings, mirrors, fireplaces, gold miniature jewelry, rare-mini books more than 100 years old, fine rugs, fabrics, and pieces made of and silver and gold.” Sound too absurd to be true? Well, you can check out this pricey and petite pad up close and personal starting this month. The Shops of Columbus Circle at Time Warner Center (TWC) will be showing the dollhouse for the first time ever since it was built in the 1980s.

The Time Warner Building is at Columbus Circle – Macy’s parade  goes through the circle.

There are small areas and places that surround the more (or from)familiar and “Touristy” areas in the city. Many time visitors want to go to the Katz Deli and Orchard Street and then walk over  to Little Italy. Broome Street is a good choice as there are several things to see along the way. (click on photos for slide show) 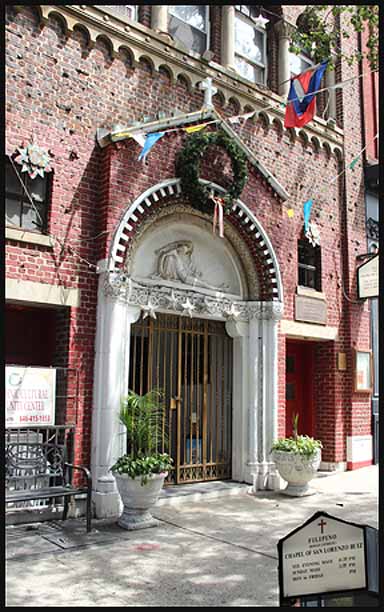 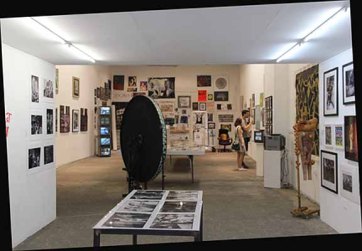 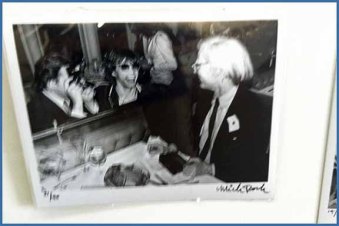 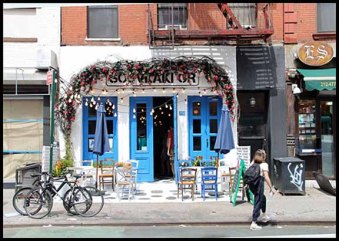 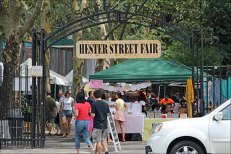 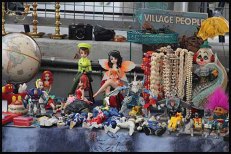 New York City is an interesting place to walk. There is activity everywhere you go.

Look at the many different buildings (not just the usual apartment house).

And doorways can be fun to look at. 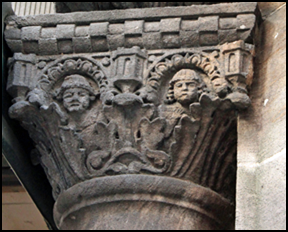 Also, don’t forget to stop and look up to find other things unique to the city. 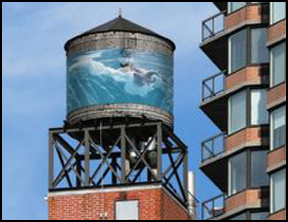 Some people walk from the Metropolitan Museum up to the Guggenheim Museum along 5th Avenue.  Unless you want to look into Central Park or going to the Guggenheim,  I don’t find this walk very interesting. I prefer walking up Madison Avenue. Here you will pass many high-end fashions displayed in shop windows. Also, some of the architecture is “old New York” and enjoyable to the eye.

Walking from east 86th Street all the way up to east 92nd Street you will have the opportunity to grab a coffee or lunch. There are several small places and remember you are in NYC, so the price may be a little higher than home so just go “with the flow“.

A reminder to go to the bathroom before leaving the museum or restaurant… public ones are few and far between in this area.

This article may be of interest

New York City has an amazing amount of art housed in many prestigious museums. However, there is a parking garage on west 65th Street and CPW that has a very unique collection of posters. A rather odd place for art but it works quite well. I wonder how many other buildings in NYC have similar displays that go unnoticed?

I am not sure these are all classic posters nor did I recognize the origins of each. When entering the garage you are surprised to find several large collages.(posters).(click to enlarge) 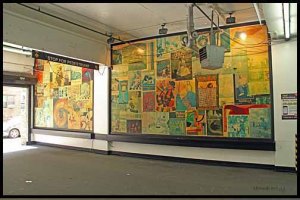 Here are a few of the posters from within the collages. They seem to represent a wide range of interests. As I write this I am wondering if the nearby Lincoln Center had some influence on displaying the posters. 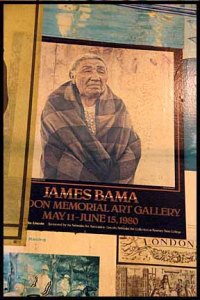 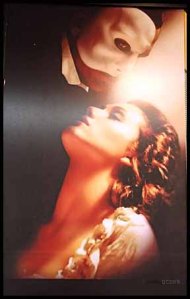 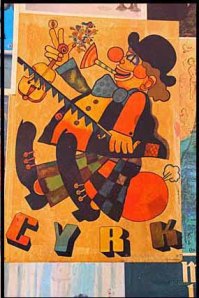 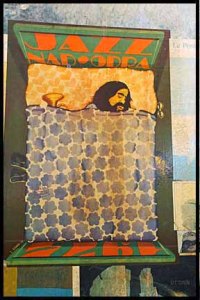 Well, it is not the Met or he Guggenheim but it is another free place to visit in NYC   You may notice a few well-known names and enjoy their poster art work.

Here is a collage of some old posters 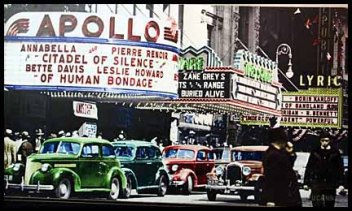 Note: This garage is opposite the Tavern on the Green – newly reopened ????   At this writing it does not have a public bathroom but is working on it. Ask for directions to the nearest bathroom) It is only a short walk into the park (from the Tavern) to a public rest room.

Also, the garage is close to Columbus Square, New York Historical Society and a short walk from Lincoln Center. It may worth a peek into? 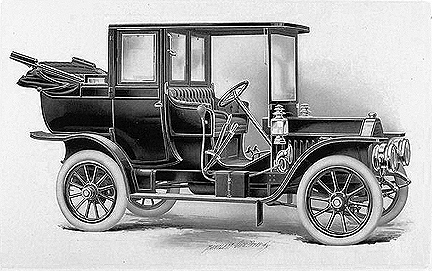 https://thombradley.wordpress.com/2014/01/14/nyc-automobile-row-2/ Walking along Broadway and 57th Street,  I have often marveled at the large ground-floor windows and wondered why they were so large. An article in the NY Times mentioned that some of these buildings were part of an area was once called Automobile Row.

In the 1950s there was the dealership that sold Hudson Hornets. And there was the storefront on Broadway that was once a Reo Motor Car showroom. (The company’s name took the initials of its founder, Ransom Eli Olds, better known for another car he had a hand in naming, Oldsmobile.) Also, Fiat took over a four-level store and showroom.

Many of the original buildings have been renovated or demolished but there are several that still exist and have enormous ground floor windows – I can only image that the latest automobile was showcased in these windows.

Some additional Photos, I hope will be of interest

In 1985, the last car dealer on Automobile Row, the stretch of Broadway from the West 50s to slightly north of Columbus Circle that was home to showrooms for almost as long as there had been cars. That year,  he turned off the lights, locked the door one last time and left for 11th Avenue. It was one of those end-of-an-era moments.

New York City is full of amazing discoveries. Today, I took a walk from west 86th and Broadway heading north to 94th Street and then (west) to Riverside Drive. Continuing, I headed south on Riverside Drive back to west 86th Street.

I have walked in this area many times but usually not in the colder months. As I came down Riverside Drive to 93rd Street, I noticed a statue of a horse and rider. (When there are leaves on the trees this little park is hard to see from the street.) As I walked up the steps, I realized that it was a statue of Joan of Arc. 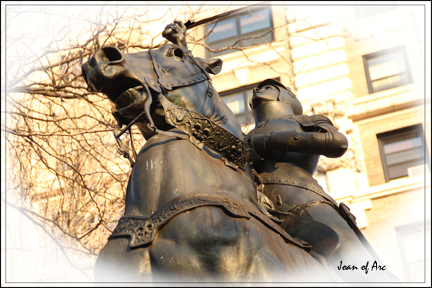 Here she is a national hero in France, sitting astride a strutting stallion overlooking the Hudson River. The story of how it came to be placed in Riverside Park is an interesting one. The idea for it all came from a group of New Yorkers who were keen, for whatever reason, to mark the 500th anniversary of Joan’s birth. They traveled to the Paris Salon of 1910 on a fishing expedition for possible ideas or leads on sculptors, and there they saw a plaster statue of Joan of Arc by Anna Hyatt, the future Mrs. Huntington. Hyatt, who was an unknown carver of animals at the time, had gone to France to study and had become smitten with Joan’s story.

Hyatt’s statue of Joan of Arc was widely praised, but Hyatt received only an honorable mention from the judges because no one at the Salon believed a woman could make such a statue without a man’s help. …No kidding. The Americans offered her the commission for the statue in Riverside Park. By that time, the monument was commemorating more than the young martyr. World War I had started, and the statue became a sort of salute to the perceived indomitable nature of the French.

It was, near as I can figure, the first statue made by a woman to be installed in New York

City. (And, for that matter, the first statue of a woman.) Hyatt did most of her work at her family’s home in Gloucester, Mass., using her niece and a fire department’s horse as models and researching medieval armor and whatnot at the Metropolitan Museum of Art.

The statue was dedicated on Dec. 6, 1915. Joan of Arc, who was born in 1412, was burned at the stake for heresy on May 30, 1431, was beatified by the Roman Catholic Church in 1909 and canonized as a saint in 1920. She was supposedly divinely inspired to help liberate the French from English rule.

. In 1920, the year Joan was canonized as a saint, 15,000 people gathered for the speech making, and the battleship U.S.S. Pennsylvania roused every pigeon on the Upper West Side with a 21-gun salute.

Much of the written material came from http://newyorkcitystatues.com/joan-of-arc/

Bonus: Group of buildings located within this walking area. 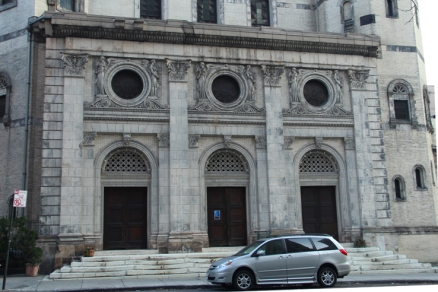 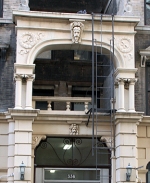 Use bathrooms on Broadway before going west. Starbucks, McDonald and Petco (upstairs) at west 92nd.